Batemans Bay and the Eurobodalla region have some of the most spectacular and unspoilt coastline on the South Coast of NSW. There are plenty of beautiful sandy ocean beaches to choose from, as well as quiet beaches in sheltered bays. There are protected beaches with gentle waves for the kids and serious breaks if you love surfing.

Popular surfing beaches are at Broulee, nearby Pink Rocks (for experienced surfers), North Head at Moruya and McKenzies Beach south of Batemans Bay.

If you’d like to learn to surf there are accredited surf schools at locations along the Eurobodalla coast that provide boards and wetsuits as well as expert tuition. Patrolled beaches can be found at many beaches including Malua Bay, Broulee, Moruya, Tuross Head, Dalmeny and Narooma during the summer holidays.

Many South Coast beaches are surrounded by native forests so you may find yourself sharing the beach with a kangaroo – Pebbly Beach is famous for its “surfing” kangaroos.

In recognition of its unique character, much of this coastline has been protected. Batemans Marine Park stretches from the north end of Murramarang Beach near Bawley Point to Wallaga Lake in the south. If you enjoy swimming and surfing in a pristine environment, this is the perfect piece of coast. 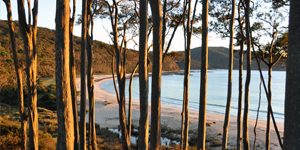 Murramarang National Park can boast some of the best beaches in Australia in idyllic settings. Pebbly Beach is just as well-known for its kangaroos as it is for its waves, but there are several others including Depot and South Durras, where the Pacific rollers swell as they rise from the sea and flex into creamy white breakers. 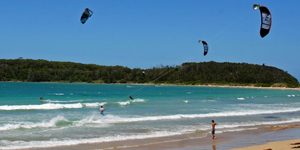 Broulee is situated 20 kilometres south of Batemans Bay, and is a long sweeping beach protected by Broulee Island. This is a favourite beach with tourists, and is ideal for families. The fishing is great at Broulee, there’s good diving and snorkelling in the area and the surfing is some of the best on the South Coast. Broulee Beach is well protected and the sand dips gradually, which makes it a family favourite. Explore Broulee Island, a nature reserve with outstanding views along the coast. 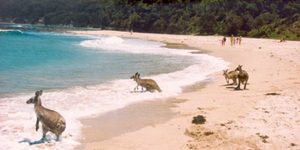 Pebbly Beach is already known widely as the home of the “surfing kangaroos” (a myth arising from a photograph of a kangaroo in the low surf – probably chased there by a dog). Although they will not be surfing when you visit, you will find a large resident kangaroo population at Pebbly that is quite happy to be patted or to pose for a photograph. The Pebbly Beach turn-off is about 10 kilometres south of Termeil and it is about eight kilometres over a gravel road to Pebbly itself. Pebbly Beach is a popular camping area with great surfing beach and bush walks within the park. 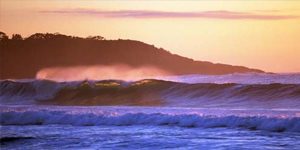 Mollymook is a popular family beach with the best parks and safest bathing in the south around the Surf Club. Surfers enjoy the southern reef when it is working and the beach breaks.

Home of the Mollymook Surf Life Saving Club (SLSC), it is a patrolled beach where every year it stages a State or National Surf Lifesaving Championship.

Amenities include public toilets and there is plenty of car parking available. 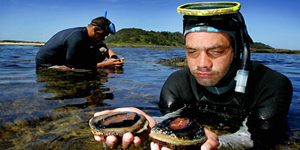 Pink Rocks beach located on the north side of Broulee Island is an exposed reef break. Offshore winds blow from the southwest. Most of the surf here comes from groundswells and the best swell direction is from the southeast. A reef breaks right. It is unlikely to be too crowded, even when the surf is up. It’s an intimidating monster of a wave with critical drop and walling and bowling sections to negotiate. It breaks over a bouldery reef and the boils in the wave face are a constant reminder of this as as you pick your way down the line. Not for the faint of heart of anyone less than very experienced in this kind of surfing. It’s best in a big southeast swell and southwest winds. 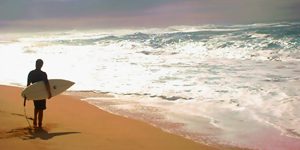 The beach is patrolled during the summer holidays and is one of the more accessible and popular in the area. 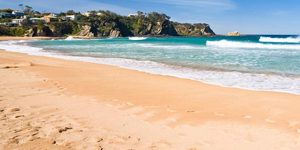 Maloney’s Beach is on the northern shore of Batemans Bay and is adjacent to the most distant bayside suburb in that area. Take the road north over the bridge, continue on for several km, then turn right into Cullendulla Drive and later turn left into Northcove Beach Rd. Soon you will see the beach on your right. Follow it to the end of the road near the National Park, and you will find shelter sheds, toilets, and free electric barbecues. You also can expect to meet some of the quite tame resident kangaroos. This beach (particularly at the eastern end) is usually quite sheltered and good for children. 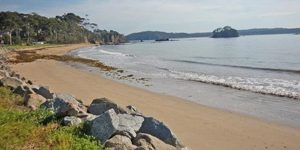 Casey’s Beach is not a good surf beach with little to no waves, but its a good beach for the kids. Its the first swimming beach when travelling south from Batemans Bay. Its located to the south of Observation Point, a curving 800 m long east-facing beach, extending from the point, south to the next rocky headland, with rocks and reefs extending off each headland 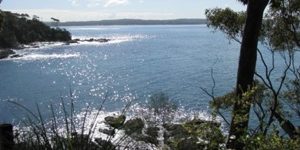 Denhams Beach is a surf beach that is popular with board riders and patrolled during January. It occupies the northern corner of the Denhams/Surf/Wimbie beach. It faces due east and curves slightly for 360 m between the boundary rocks. Waves average about 1 m and maintain a continuous low tide bar usually free of rips. It is backed by a small foredune, then blufftop houses in the north, with a small car park accessed via the streets. A caravan park is located on the southern boundary point. 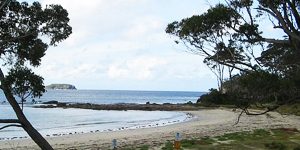 Wimbie Beach no big waves good for the kids and family 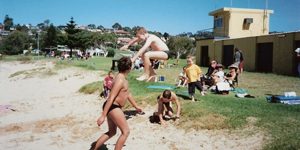 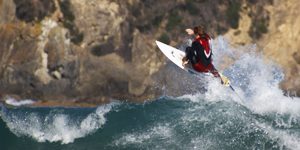 McKenzies Beach is a surf beach popular with board riders, it is unpatrolled. 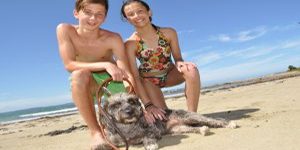 Corrigans Beach is a perfect beach for fishing, sailing, hiring a jet ski, swimming or just relaxing in the sun. 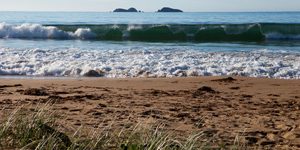